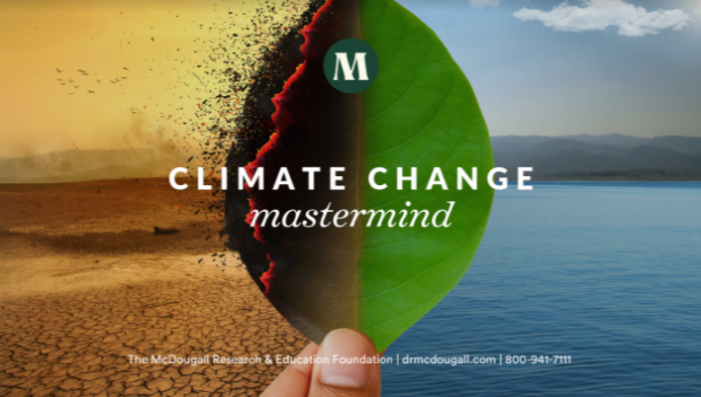 Buy or Gift a Ticket

Climate Change: It’s the Food! I, along with most of you, was first made aware of the existential perils of climate change by Al Gore’s documentary, An Inconvenient Truth, in 2006. He clearly laid out the disastrous future ahead with his solutions being largely limited to curtailing the fossil fuel industries. No mention was made of the livestock industries’ contributions to global warming. Nor did his 2017 Sequel provide enlightenment on the potential role of curtailing our addiction to meat-eating for saving our home. In 2006, the WHO published highly-influential research, Livestock’s Long Shadow; a nearly 400-page report finding livestock’s contribution to GHG production to be nearly 18% of the total; while all transportation (buses, train, cars, planes, etc.) accounts to less than 14%. By including several additional factors, those underestimated by the WHO report, the WorldWatch Institute concluded that livestock actually accounts for more than 51% of the GHG produced annually. (See: https://awellfedworld.org/wp-content/uploads/Livestock-Climate-Change-Anhang-Goodland.pdf) The EAT-Lancet Commission, considered to be the authoritative word on the subject of climate crises and diet, published their conclusions in 2019: The livestock industry is a major detriment to planetary survival; and that we have fewer than 12 years to take action before life on Earth becomes impossible. In March of 2020 the EAT-Lancet Commission reported that replacing beef, pork, and poultry with a plant-food-based diet reduced the GHG associated with people’s diets by up to 50%, depending on the type and degree of substitution (vegan being most effective). (Lancet Planet Health. (2020) Mar;4(3):e98-e106). Further encouragement about the power of food comes from scientific findings that changing from a standard Western diet to a vegan diet can reduce GHG production by as much as 80%. (PLOS ONE, Nov 3;11(11) (2016). A simple U-turn, back to traditional diets followed by the more than 100 billion human inhabitants who have walked planet Earth, is the change in eating patterns I am proposing. All large populations of trim, healthy, athletic-competing, war-fighting people throughout verifiable human history have obtained the bulk of their calories from starches. Examples of thriving populations include the Japanese, Chinese, and other Asians, who ate sweet potatoes, buckwheat, and/or rice; Incas in South America who ate potatoes; Mayans and Aztecs in Central America were known “as the people of the corn;” and the Middle East, formally known as “the breadbasket of the world,” fed hundreds of millions on a diet of wheat and barley. The vast majority want a viable future for their children; they just don’t know how to attain this elusive, but precious, goal. People are poised for big changes in their lives, especially after realizing that there is no going back to “normal,” and that in fewer than 50 years we face extinction. Looking back, to only 50 years ago, the majority of people on planet Earth followed a starch-based diet; and many of us are old enough to remember these times. How ironic to realize how knowledge commonly held within one lifetime— the traditional starch-based diet—would also be a necessary part of the solution to mitigating climate change for the next half century, and beyond, for the lifetimes of many future generations. We have a world to save and every bite counts.

Get your LiveStream Tickets before they sell out!

Buy or Gift a Ticket

SWITCHING TO ANOTHER DEVICE?

If you leave this page open on the original device you're watching on then you won't be able to use your ticket to watch from another device.

Your Ticket was Deactivated on this Device.

In order to watch the live broadcast of this event, you need to have a broadcast ticket. Do you have your ticket yet?

If you don't have your Ticket yet, you can purchase one online, by clicking below.

SWITCHING TO ANOTHER DEVICE?

If you leave this page open on the original device you're watching on then you won't be able to use your ticket to watch from another device.

Your Ticket was Deactivated on this Device.

Most issues can be resolved easily with our help articles below.
Contact Support at: Support@AftonTickets.com

YOUR DEVICE WAS DEAUTHORIZED BY SOMEONE ELSE WHO IS USING THE SAME TICKET THAT YOU ARE USING.

Are you the one who did this? If so, watch from the device/browser you just launched your ticket on. If you want to watch it here instead, relaunch your original LiveStream ticket email to access the stream.

If you shared your ticket with a friend, or they shared their ticket with you, you can't both use the same ticket. You can relaunch your original LiveStream ticket, but if your friend tries to use it at the same time as you, it will kick you out of the stream.

If you purchased multiple LiveStream tickets make sure you and your friends are each only using 1 of the tickets in your order at any one time. Multiple tickets in an order will be labeled uniquely, for example: Ticket 1 of 3, Ticket 2 of 3, Ticket 3 of 3.

If you need to buy an additional ticket click here.